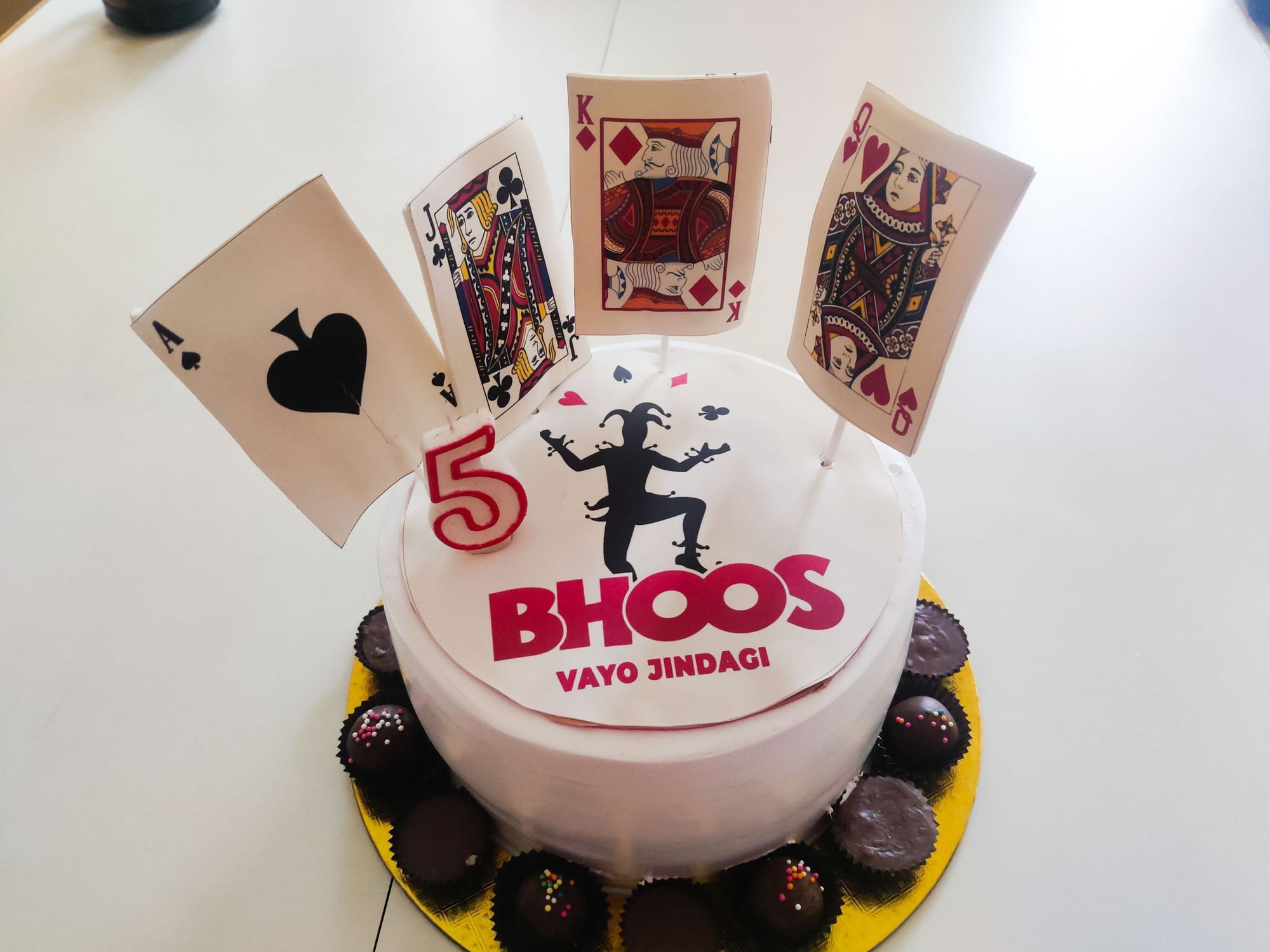 A few months ago, we realized that Bhoos was born on the eleventh day of January 2016. Apparently, that was when the first commit was pushed on our repo.

Silly as it might sound, finding the birth date had never crossed our minds before that. Now six years later, we recount the ups and downs that have led us to where we are today.

It all started with two friends, Ranjan and Vinayak.

Vinayak had been running a web version of the Marriage card game since 2010. However, the game didn’t have a single-player function as the game completion algorithm for Marriage isn’t exactly straightforward.

Ranjan had recently exited from his first company and was looking for challenging things to do. The game completion algorithm for Marriage was something he couldn’t pass on.

Hence, on one sunny day at Busy Beans Cafe at Jhamsikhel, the duo decided to make a mobile application for Marriage Card Game with a single-player mode.

And that was how Bhoos Entertainment came about as a side hustle for both members.

The first version of Marriage Mobile App used Cordova to run a web version in a mobile app. Needless to say, it sucked. After months of work, they scrapped the original implementation and rebuilt the game from scratch using React Native.

Come Phulpati of 2016, the Marriage app was launched. It became loved by many for the easy game finish algorithm, fun bots, and exceptional performance. Of course, it also helped a lot that it was the first Marriage mobile app on the iOS platform.

After the success of the Marriage App, we took on Call Break, a game that was a lot more popular than Marriage. We worked extensively on the bots for CPL and are proud to say that they are probably the smartest out there. However, the best part about the bots is that we can easily tweak various properties of the bots, such as memory, tolerance to risk, and inference.

In a crowded and saturated marketplace like Call Break, CPL was a lesson in humility. We realized quickly that our Customer Acquisitions Cost was only marginally lower than our Customer Lifetime Value. We had two choices, clutter the game with more ads or innovate.

We took the latter route.

The first innovation was to create a mobile app that could easily have as many card games as we wanted and do this in a highly optimized and classy way. Think server response time below 2 ms, 5kbps bandwidth requirement, and the capacity to handle 20,000 concurrent users!

This means that the users can have all of their favorite card games in an app that never lags and crashes.

While we were confident in the technology, we still felt something else was missing.

Games to Bond with

2022 is going to be all about bringing all these ideas together in a product that people would love to use to connect with their loved ones daily.

The first release will be a revamped Marriage Card Game with Circles. Through circles, you will be able to create a group of co-workers, family members, or friends and quickly invite them to a game of cards. Also, expect voice chat and game scheduling within circles in the Marriage App.

Bhoos Games, the mobile app, will also gradually see some social features from the Marriage app seep into it. We will also add Teen Patti, Poker, and Rummy in Bhoos Games in 2022.
Wish us luck and a happy birthday. Oh, btw if you haven’t already done so, do check out our brand new homepage. It should be up by now.